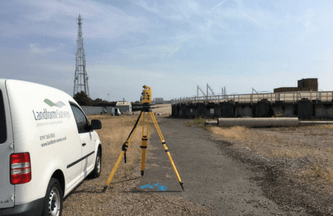 Surveying as a discipline has existed for hundreds if not thousands of years, and some of the equipment used today originated hundreds of years ago. While the technology behind them has improved, at their core they are the same instruments. The three that are most used in survey are:

The instruments used in surveying are precision instruments used to get accurate measurements that can be then be used for mapping, modelling, and creating floor plans. Surveying equipment often have uses other than for surveying so you may see them out in the field and not being used as part of a survey but will still be used for gathering measurements. While some instruments may be more advanced than others, sometimes it is not necessary to use them on every job depending on what is being surveyed.

Though rarely used nowadays, the theodolite was the predecessor of modern survey instruments.  It measures angles in the horizontal and vertical planes, and can be very accurate.

The theodolite was used in the re-triangulation of Great Britain between 1936 & 1962, using concrete trig pillars established on hills and mountains throughout the country. Using the data collected the Ordnance Survey mapped the whole of the country.

This is an instrument that is used largely for topographic surveys in different environments.

The total station or total station theodolite is a more comprehensive version of a theodolite, which combines an EDM (electronic distance measurement), with a theodolite and a microprocessor which is capable of storing data. It is used in topographic surveys, setting out and elevation surveys. As it can read slope distances, it is also used in surveying quarries and mines.

Measurement is done using a modulated microwave or infrared carrier signal. This is generated by an emitter in the instrument’s optical path. As with a 3D laser scanner and theodolite, a total station can only survey what it can view, so if a point is obstructed, it will not be measurable. The signal is then reflected by a prism reflector onto the point being surveyed. The pattern that the return signal produces is then read, recorded and interpreted by the microprocessor, minimising the manual work done on calculation.

Whereas a theodolite can only be used to measure horizontal and vertical points, a total station can take an average of multiple angles and distances that are measured, as well as calculate the distance between two points and take elevations. Many total stations can also remotely measure to points, so heights of buildings and structures can be measured without the need to visit the point.

Drone surveys are also being utilised more and more to survey large areas, for roof surveys,  and other inaccessible areas. As well as providing a photographic record, point cloud information can also be produced to complement terrestrial laser scanning.

A transit level is the most simple of all the instruments we’ve talked about here but is still incredibly useful given its simplicity. It is used in both surveying and building, which goes to show its versatility. Used for horizontal lines and points, they measure relative levels.

Similar to a theodolite, a transit level has a spirit that levels the device. The telescope then pivots horizontally to take readings.

Precise levels can measure the height of points highly accurately, to tenths of millimetres. This is used in the precise monitoring of buildings, dams and earthworks, where any infinitesimal movement can be tracked over time.

If you would like to learn more about the specific equipment Landform Surveys used, get in touch.