10 things you didn’t know a drone could do

Although it seems as though the drone has suddenly increased in popularity, the invention has had many responsibilities over the past century. Once reserved for military and surveillance use, the ‘quadcopter’ has also been scoped as transport for aerial deliveries by Amazon and a photography tool by many consumers. But what about the unexpected? Read on for 10 things that you didn’t know a drone could do:

Drones are used by teams of animal researchers to collect animal samples without disturbing natural habitats. One example of this is the SnotBot, invented to improve the health of the ocean ecosystems. They hover in the air above a surfacing whale and collect any mucus exhaled from its lungs. The samples can be inspected back at the lab without any harm caused to the animals. To better understand the process of coastal erosion, LiDAR technology is often used but it can be expensive, labour-intensive and time consuming. Instead, drone technology is becoming the go-to tool for this type of activity as the machines can survey areas that aren’t accessible by foot. The information gathered here can provide insight into how fast a coast is eroding and any patterns that are emerging.

One Swiss air rescue service has introduced a new tool to assist with their search for missing people. The drone is equipped with heat-seeking technology that can find people who may be lost, injured or poorly in the mountains of Switzerland and Lichtenstein. The drone is able to identify a phone within an uninhabited area from hundreds of meters away – leading to its owner.

Back in 2016, one New Zealand couple became the first people in the world to have a pizza delivered by drone. Avoiding traffic jams and reducing delivery time, Domino’s claimed that pizza delivery in this form would be something they’d be putting further research into.

Drones were set up by Unicef in Africa to help monitor the breeding activity of mosquitoes and spread of malaria. The drones have the ability to gather aerial photography that can be paired with groundwork which identifies the areas where mosquitoes are collectively breeding. This can be used to help prevent the spread of disease in deprived areas.

Saildrone is now available as an app and is used to gather and present precise weather forecasts. The company have a fleet of saildrones which continuously crisscross around the planet, collecting atmospheric and oceanographic data. The drones are able to provide more accurate data than other weather forecasting tools. The Plastic Tide Project was set up to combat the rising levels of plastic pollution in the ocean. With the use of drones and AI, he has created drones that are able to search the seas and collect plastic and debris. To ‘educate’ the drone on what plastic looks like (and avoid the drone mistakenly identifying fish as plastic, thousands of images have been uploaded to an open-source map.

In 2016, it was recorded that more than 6.5 billion trees were lost each year due to human activity. Traditionally, replanting is done by hand because a tree must be planted with precision so that it grows properly. One NASA scientist devised another method to accelerate the process with drones. These drones are able to fly over an empty field and examine the terrain conditions, they are then able to fire small pods that contain germinated seeds into the soil.

When kitted out with thermal imaging cameras, drones can detect abnormal forest temperatures. This allows teams to identify areas that are especially prone to forest fires and identify a fire only 3 minutes after they begin. 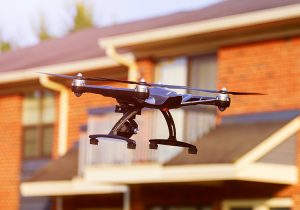 Set to go on sale in 2020, Sunflower Labs have created a drone that can protect your home from potential trespassers. The lights from the drone illuminate the ground and are able to detect any motion or vibration. These signals are then sent to the drone’s base station which can identify different noises. If the drone becomes ‘worried’ an alert is sent to an app on your phone from where you can deploy another drone. This second drone pilots itself around to the trouble spot and you can watch it live on your phone.

Here at Landform Surveys, we use drone surveying to monitor coastal erosion, carry out topographic surveys and generate aerial images and video. Contact us today to find out how we could help your project.