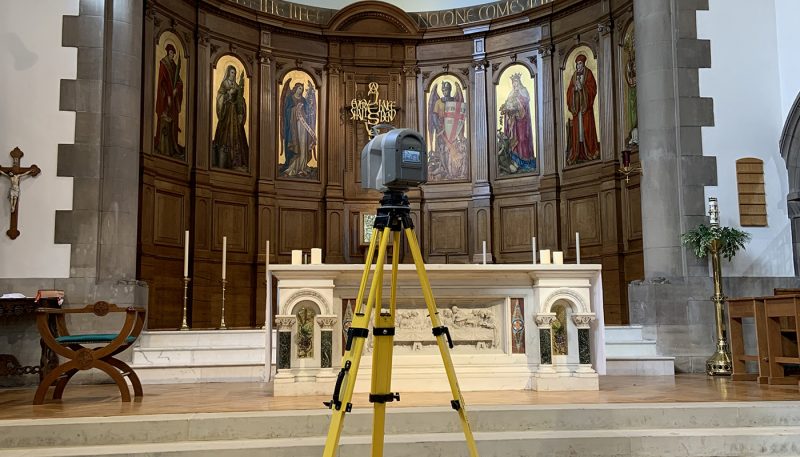 3D laser scanning is considered one of the most efficient and accurate methods for measuring infrastructure. A 3D laser scanning survey involves the remote collection of data points from a building or structure at a higher speed and with a greater level of detail than conventional surveying techniques. The captured set of data points (point cloud) are mapped on a grid coordinate of x, y and z.

What is a 3D Laser Scanner?

A 3D laser scanner is a surveying instrument that emits a laser beam from a rotating mirror towards the area being scanned. This laser beam is then distributed at a vertical range of 300° and a horizontal range of 360°, with the laser beam being reflected back to the scanner by any objects that are in its path.

The distance between objects and their angles are then captured, providing point cloud data, whereby a point cloud is a set of data points in a coordinate system with X, Y and Z values representing the surface of objects.

Why is 3D Laser Scanning of Buildings Important?

Especially in the initial stages of a redesign, renovation, or maintenance project, it is important for existing conditions to be captured. Compared to more traditional surveying methods, 3D is less time-consuming, provides a greater amount of detail (reducing wasted time on site revisits) and is less intrusive.

As projects progress throughout the varying stages, 3D laser scanning can also be used to provide precise details, which can be used by all involved on the project.

There are a variety of 3D laser scanners on the market, including:

Stationary 3D Laser Scanners, commonly referred to as terrestrial laser scanners are stationary lasers that emit lasers in 360 degrees to cover the sphere around them. These tools are used to document vertical structures such as buildings, industrial facilities and bridges. Stationary scanners document vertical structures, such as buildings, and produce the most accurate point cloud data.

Handheld 3D laser scanners, emit a laser beam directly towards an object rather than producing a 360 degree scan and are more commonly used to scan smaller objects which are within a closer proximity.

A backpack 3D laser scanning device is worn by an individual and captures data as they walk through a structure. This method of laser scanning is less common compared to that of a stationary scanner.

At Landform Surveys, we use the latest 3D scanning technology, capturing over 1 million points per second, to produce surveys with exceptionally high levels of detail and functionality. With our final deliverable being available in Trimble Realworks Viewer format, you can easily access and edit point cloud information.

We provide our scans in a variety of outputs, including 2D/3D Autocad drawings, point clouds, and rectified images. If your project requires a 3D laser scanning survey, contact our surveyors for more information.